We left the Grand Canyon just after dark and planned to drive through the night to somewhere in California. In our planning stage we’d gone back and forth about whether or not we wanted to stop in Vegas. I was leaning toward no, and I think Brooke was leaning toward yes. We were inevitably going to be passing through some major cities, and I planned to hit some highlights in a few, but cities were definitely not the focus of the road trip. Having just spent a night in a hotel in a random town I was eager to get back to camping.

Cities are overwhelming for me. I hate crowds, I hate public transport, it’s disorienting sensory overload when I’m trying to keep up with the kids. I do love to visit cities with my husband, though. He’s very at home in big cities despite growing up in a town with one stoplight. He’s an expert navigator and a literal history genius so it’s fun seeing cities through the eyes of my own personal tour guide. Also, most importantly, the man can not be rattled. He doesn’t know the meaning of the word anxious. He is always fine (in more ways than one, wink wink) and he’s never stressed. When he’s with me, he can be my quiet place and keep me calm. I’ve had the pleasure of visiting some of the best cities in North America and Europe with him. But I wasn’t looking to explore a big city without him. Except… you may have noticed in other posts that I continue to point out that Brooke and Daniel have a lot in common. And if you can’t have a Daniel with you in the city, you want a Brooke with you. (or vice versa) so that’s why, in the wee hours of the morning as we passed through Las Vegas and tried in vain to wake the children to see the lights of the Las Vegas strip, I was willing to pull over in Sin City and make a day of it.

I had been to Las Vegas before, with another of my closest friends. My friend Amanda invited me to go to the National Finals Rodeo with her and her family and another friend of ours when we were 17. Her ridiculously generous parents paid my way and I had an absolute blast. But even though I had nothing but fond memories of Las Vegas, I knew I hated Las Vegas. I knew that the reason I had such a great time when I was 17 was because of the rodeo, and because of the people I was with. It’s not hard to have fun with fun people, when you have zero responsibilities, and when you’re a couple of super cute 17 year olds and every beautiful 20 year old cowboy on planet earth is tipping his hat at you as he walks by. Also, even though Amanda was a barrel racer, I had not yet been to a rodeo, so it was cool that my first rodeo was the biggest and the best. (And ever since I’ve had a habit of saying “this ain’t my first rodeo.”) We stayed at the New York New York and we had our own room. Her parents somehow managed to strike a balance of guiding us around the family friendly parts of Vegas while still being super chill and letting us have a great time. But even with the rosy glasses it’s hard not to see the strip for what it is. I know I’m the only person on earth that freakin hates Vegas, but there you have it. I’m a judgy prude, what can I say? The strip is a pit of filth. YEAH I SAID IT.

By the time we got to the hotel it was probably 3 or 4 in the morning. I was given a room that already had a squatter in it so security was called and I was a little freaked out, but was quickly given a different room with a strong odor of urine. Awesome. Brooke offered to switch with me, because as you may remember from my previous post, I hadn’t slept at all in my non-air-conditioned room in Arizona, but I just wanted to sleep. So we slept til late morning.

Sherbet in a Cone
Brooke had recently been to Las Vegas and had in mind a few things she wanted to show her daughter Ridlee, and a few things she thought would be fun for the whole group, so we went our separate ways for the early part of the day and planned to meet up later. I took the van and Brooke and Ridlee took advantage of public transportation. I had two objectives in Vegas. 1. Find a Best Buy so I could mail something to Daniel. 2. Get my four year old some sherbet in a cone. Sweet, sassy little Beatrice had been asking specifically for sherbet in a cone for the last five states. She patiently reminded us periodically that this was what she’d like to do. Being only four, the significance of the places we were visiting were often lost on her, so it was really important to me to make things magical and exciting for her too, so that she didn’t just feel like she was along for the ride, seeing things everyone else wanted to see. We wouldn’t be us without her, and her interests are important too. Sometimes that meant stopping at a McDonalds playground or a crappy little park or a Baskin Robbins. Problem was, I could not find any sherbet in Utah or Arizona, so I made it priority number one to get Beatrice her ice cream, just the way she wanted it. We agreed to eat at whatever local restaurant was closest to the ice cream shop, and as luck would have it, right beside it was a tiny hole in the wall ramen restaurant. It was incredible, and Beatrice still remembers this day as one of the more exciting parts of the trip, even though it was a pretty dull afternoon for everyone else.

The Strip
After Best Buy, lunch, and ice cream we went back to the hotel to walk the pets (we’d left them lounging on the hotel beds with all their toys and each other to play with. Don’t tell anyone.) Afterward we took a nap. As dinner time approached Brooke guided us to the city bus and instructed us all when to get off in order to scout out a very well hidden pizza place she’d eaten at last time she was in Vegas. It took us a while to find it, but it was so worth it for the giant, gooey pizza slices and huge cups full of wine. We wandered down the strip, popping into the hotels to show the girls all the glitz and glamour. We shopped at the M&M Factory and the Hershey store and ended the night watching the water show at the Bellagio before we took the bus back to the hotel, and the girls were able to see the lights of the strip up close. I remembered how, when I was in Vegas at 17 years old, I loved seeing the mini statue of liberty, mini Eiffel tower, the “streets of New York” and “canals of Venice” and Cesar’s Palace. They seemed to bring those places to life for me but I thought that, now, having visited the real New York, the real Paris, the real Venice, and the real Rome that it would seem very cheap and cheesy for me and the girls. But you know, it was still actually pretty cool and only brought back lovely memories of our travels. Maybe Vegas wasn’t so bad. Except then it got dark an the energy changed from family friendly to not-so-much in the blink of an eye, and it was nice to be headed back to the hotel. Brooke was an excellent tour guide, and I’m glad we stopped in Vegas, and with any luck, I’ll never set foot in that fascinating town ever again. 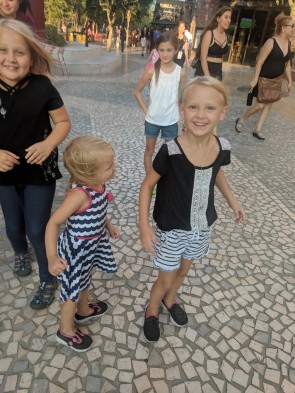 Catholic, Army wife, homeschool mom of four, just like every other mom blogger. I shop at Costco, drive a bitchin' mini van, and wear Birkenstocks. Sometimes I tell stories on my Facebook page and my mom's very charitable friends will say things like, "you should write a blog!" So, you know. Here we are. Even though I already used all my material on my Facebook. We don't actually throw darts at a map to choose where we're going. That would be reckless and nonsensical. No, the Army is the one throwing the darts. View all posts by hqualk